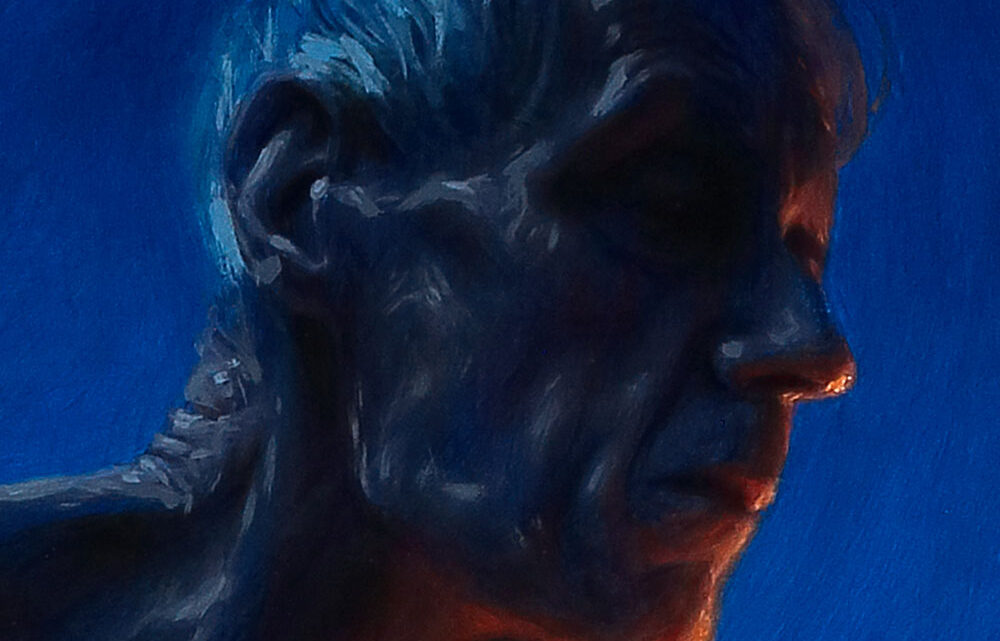 While studying in Florence in my twenties my home was an attic room in a convent run by Irish nuns in Fiesole. It was called the convent of San Girolamo (or Saint Jerome), just up the hill from the Medici Villa. There were images of him everywhere. Jerome seemed to be one of the Renaissance artists’ favourite saints, and I came to love these depictions of him, typically as an old man, often almost naked, alone in the desert, lost in otherworldly meditations. Returning to Ireland and finding the perfect model for Jerome, I thought I’d have a go, and painted several versions of which this is the last. Although it was almost completed twenty years ago, the final touches waited til now!

For most of this time it has been in my attic, but recently a foreign patron seeing an old image on my website and encouraging me to finish the piece finally prompted me to take it down, reassess its merits, and resolve the outstanding issues. In part it had been problematic for me because I had pushed the blues to such an intensity and I was ambivalent about the result. But the religious subject of the painting also caused me problems, as it did some of my viewers, and it was more this latter issue which had caused the picture to be consigned to limbo.

Back in 2003 when I exhibited this and several other Renaissance-inspired pictures with broadly religious themes I was surprised by the outright hostility of many viewers. At the time Ireland was changing quickly from a staunchly Catholic country to an essentially post-Christian one, and the vanguard in this transformation was vehemently anti-Catholic and anti-clerical. They really didn’t like these paintings and seemed to view them as an affront to modern secular values, the embodiment of right-wing Catholic reaction. In fact I was neither Catholic nor right-wing and (as I saw it) merely repaying a debt to my Renaissance heroes, but I learned some valuable lessons. While I remain totally inspired by Renaissance art, I have since sought to extract what I love in it from the outward forms of a dying religion. I’ve tried to retain the language (so to speak) but I’m using it communicate something different and more specific to our time. To that extent, this picture represents a path of more conventional expression, a road not taken.