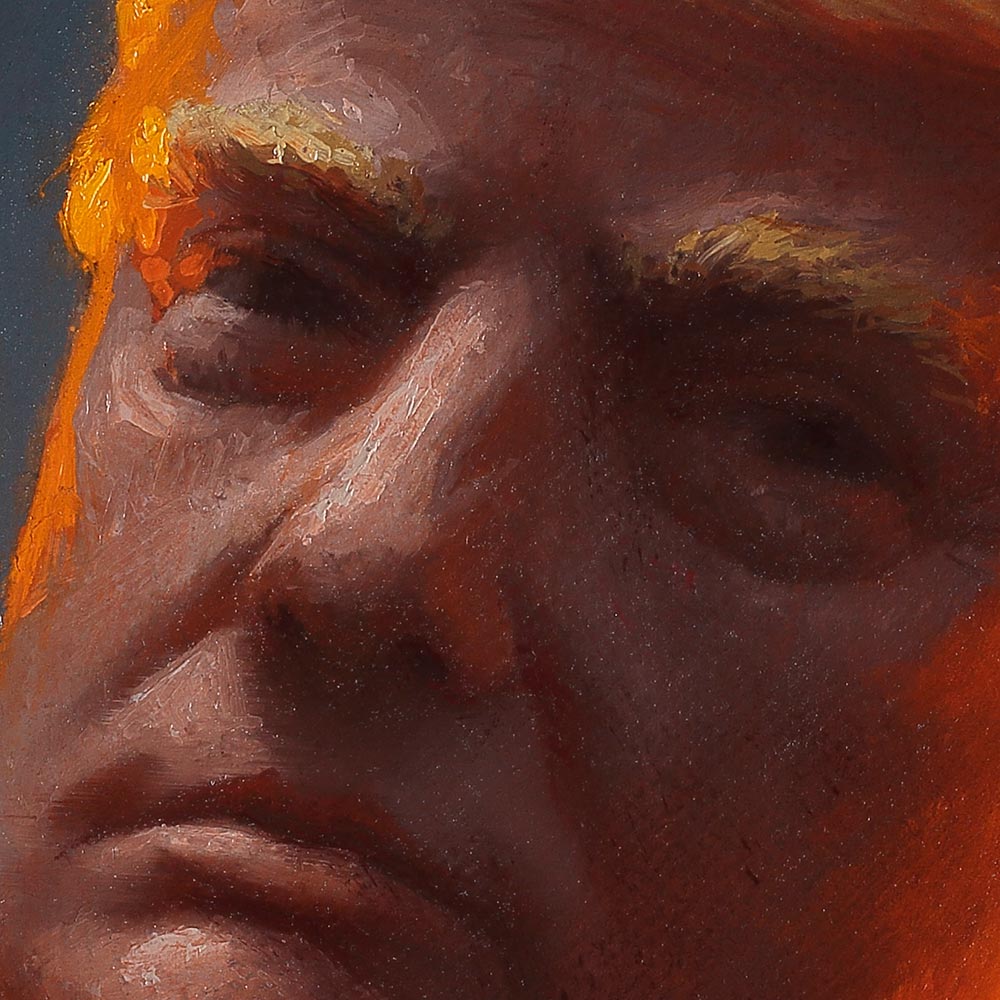 The idea for this painting came from a Facebook discussion about who might paint President Trump's official portrait. Some of America's best portrait painters were part of the conversation but it appeared that none of them would touch the job: the phrase 'career suicide' was mentioned. It struck me as an opportunity lost.

I started thinking about how I'd like to paint Trump, how it might be possible to portray him in a way that would satisfy his ego and vanity, be true to his belligerence and macho sexism and also work as satire and critique. The old Frank Frazetta image of Conan the Barbarian came to mind as a template, one that would be true to his American low culture base and easily legible to all who grew up on cheap fantasy art and literature, superheroes, Hollywood, thus widely enjoyable and hard to disown or reject, whether you loved Trump or hate him. 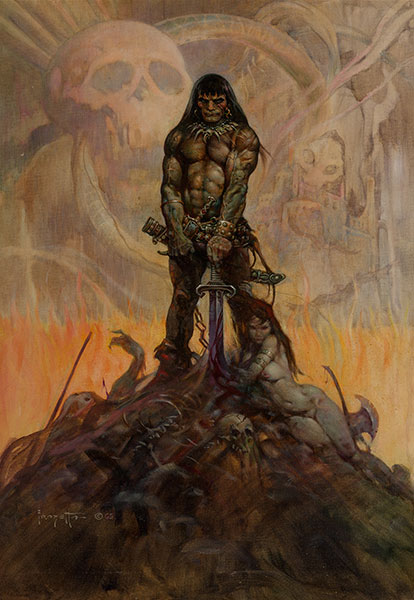 When Michael Pierce asked me to contribute to an exhibition he was curating in California called 'The Illusionists' and explained the theme and crossover from fantasy art with 'Conan' artists like Boris Vallejo involved I told him of my idea and he approved. Since the exhibition was to open on March 31st we decided to publish the image on social media on April 1st, claiming it to be President Trump's official portrait. I tweeted "Thrilled and honored to be chosen to paint at @realdonaldtrump portrait! Heading to Washington for the unveiling." There was the possibility it would go viral on Twitter and provoke the President to respond, but this involved a certain risk: he might not appreciate the joke. Falsely claiming that the picture was trump's official portrait essentially put me in legal jeopardy with the most powerful man on earth and one not averse to suing and otherwise making life difficult for his enemies. I had to balance the risk of being sued and facing costs of hundreds of thousands in legal fees against the reward of possibly hooking the President of the United States in a practical joke. There was also the danger that he would like the painting which had its own attendant risks. So it was with some trepidation that, just after midnight on April 1st in a California hotel room, I broadcast the image and switched out the light, knowing it would be seen straight away by my home crowd in Ireland (8:00 a.m. Irish time) and roll across the time zones while I slept.

The response to the painting was, to say the least, varied. I was cheered, denounced and everything in between. Most people grasped the April Fool's element but not a few were taken in and really believed I had gone over to the dark side! Thankfully it didn't get me into any serious trouble and I assume it passed beneath Trump's radar but I got a little heat from some on the Left who thought I was glorifying him and some on the Right who thought I was attacking him. I expected this.

Reaching across the divide in our age of increasing political polarization involves what I think of as 'dancing long cultural fault lines', in my case using fantasy, humor, playfulness, irony, the feigned craziness of the court jester, to articulate serious issues in a manner that is both challenging and mercurial; that allows and even encourages multiple interpretations. 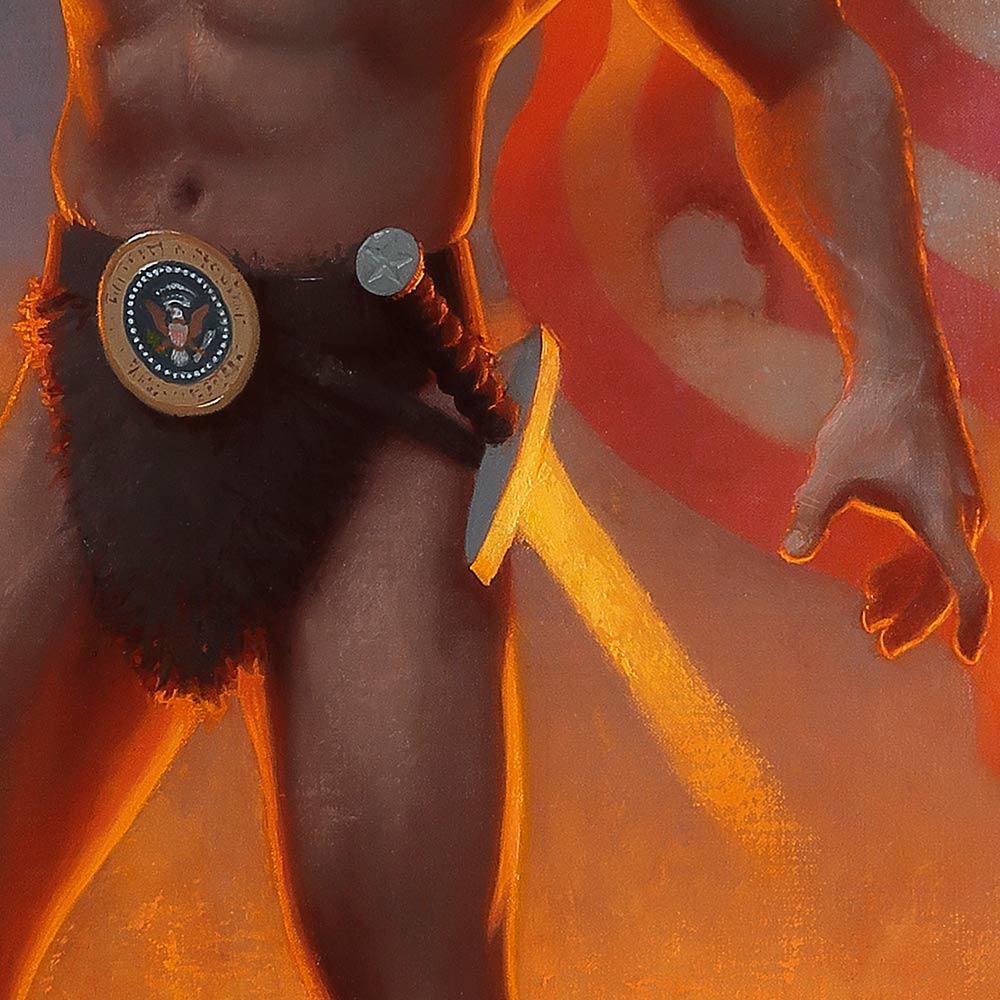 When I painted it I imagined two opposed ideal observers for the picture: one on the far Left who would see in this picture everything that is wrong with America, and one on the far Right who would enjoy it all; who would see it's machismo as empowering, it's sexism as a poke in the eye to radical feminism, and the fascist salutes as maybe no big deal. In a deeply politically polarized culture the average intelligent viewer might be aware of both viewpoints, both possibilities, and this face a real choice: whether to laugh and take it as spoof and satire, or to take him very seriously indeed as the fascistic shape of things to come. For many who failed to take Trump seriously, who still can't quite believe what happened and struggle to make sense unfolding events I think the answer may not be entirely obvious.

Michael Pierce came up with the title. The motto 'Novus Ordo Seclorum' appears on the Great Seal of the United States and can be translated as 'a new order of the ages.' It was intended to signify the beginning of the new American era with the Declaration of Independence. It's appeared on the back of the US dollar bill since 1935. My use of these words is obviously an ironic, perhaps tragic repurposing. 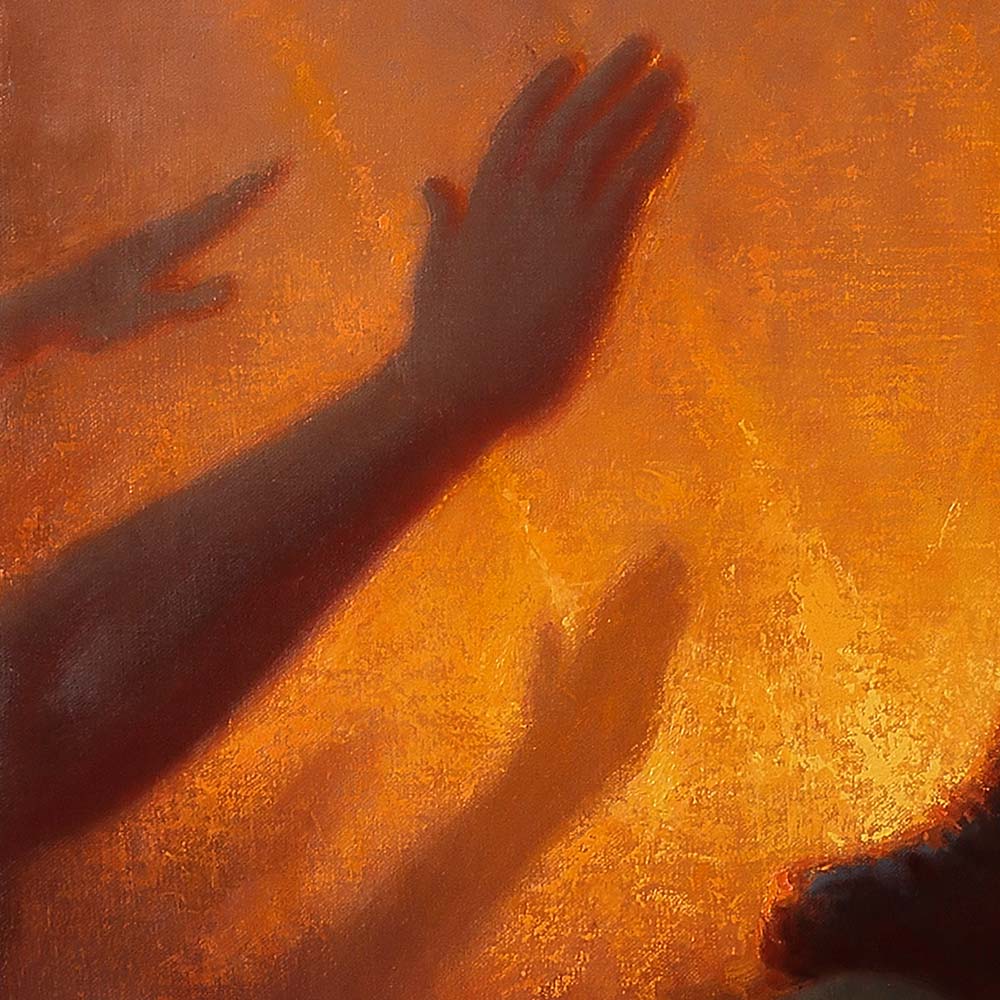