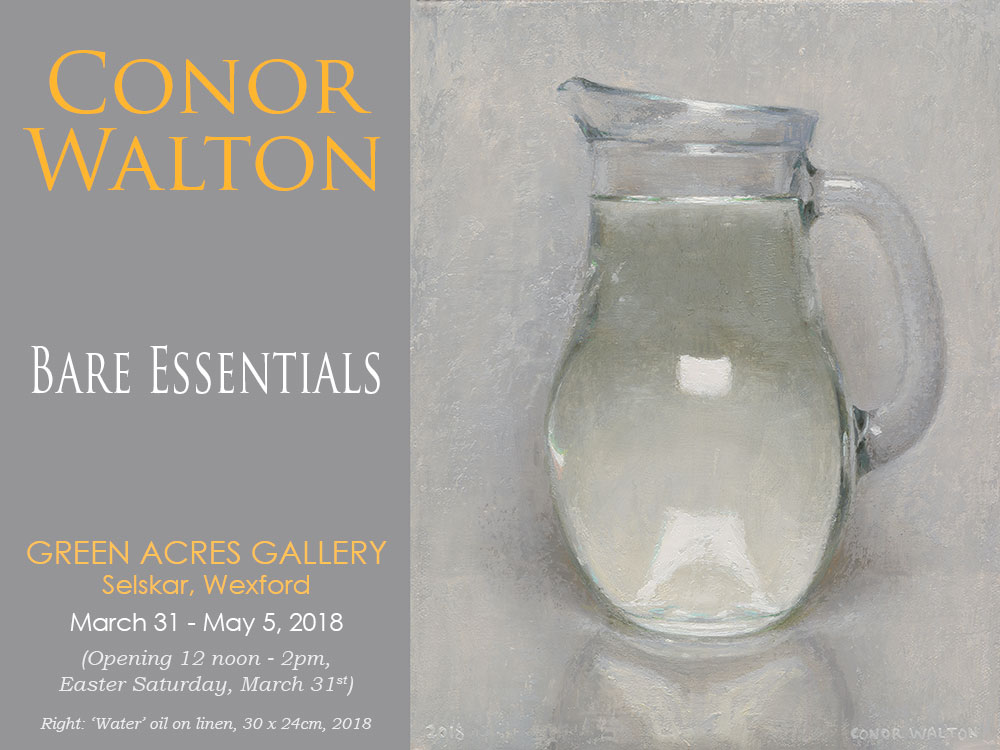 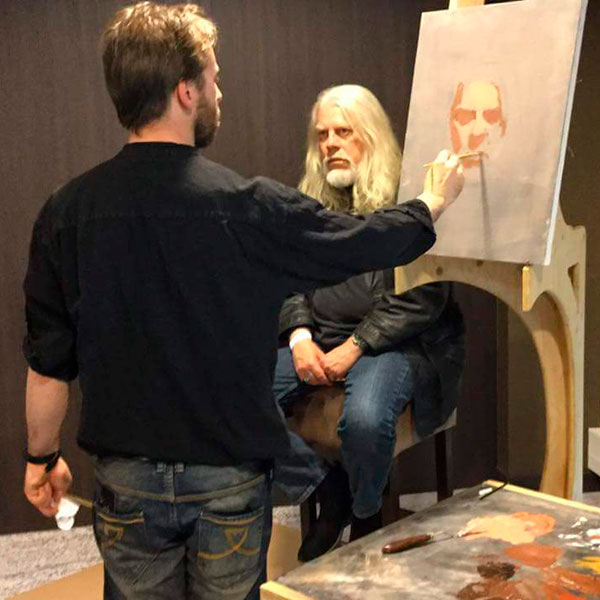 "The Representational Art Conference is the most important art conference in the United States, and the world, in support of representational art, an art grounded in attention to objective reality, with no sacrifice of attention to emotional reality. In his dubious Solomonic wisdom Kandinsky separated them, resulting in the elevation of abstraction over representation. The pressing issue of art since then has been their reconciliation, for one without the other makes for a radically incomplete art. The many representational artists the conference serves show the way to their reconciliation."
- art critic Donald Kuspit 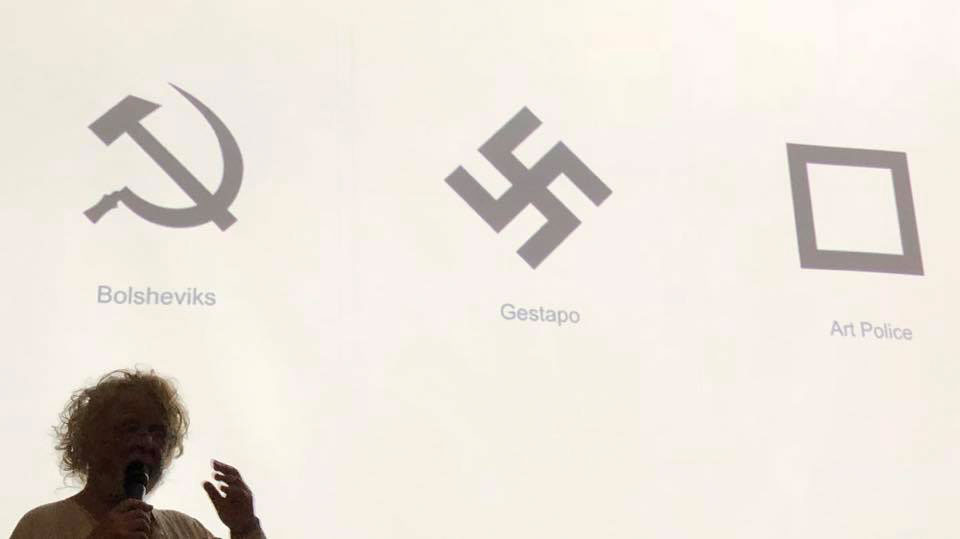 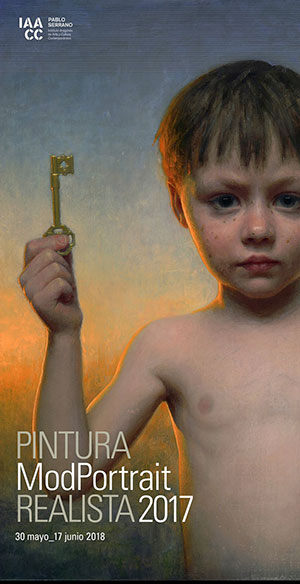 Conor Walton's painting of his son, 'The Key', has won the ModPortrait 2017 Prize in Spain. His portrait was selected from 55 finalists from around the globe, with honorable mentions given to Su Liu (China), Zhu Junhe (China) and the Spanish artists Carmen Mansilla, Marcos Rey, Pedro del Toro and Iván Franco.

The prizegiving was at the Museo Pablo Serrano in Zaragoza on June 3rd at the opening of the exhibition, which runs to June 17, 2018. The exhibition then moves to MEAM, Barcelona from June 22 until July 29. 'The Key' will then join MEAM's permanent collection.

Now in its fifth year, ModPortrait is fast becoming one of the most important prizes in the figurative art world. 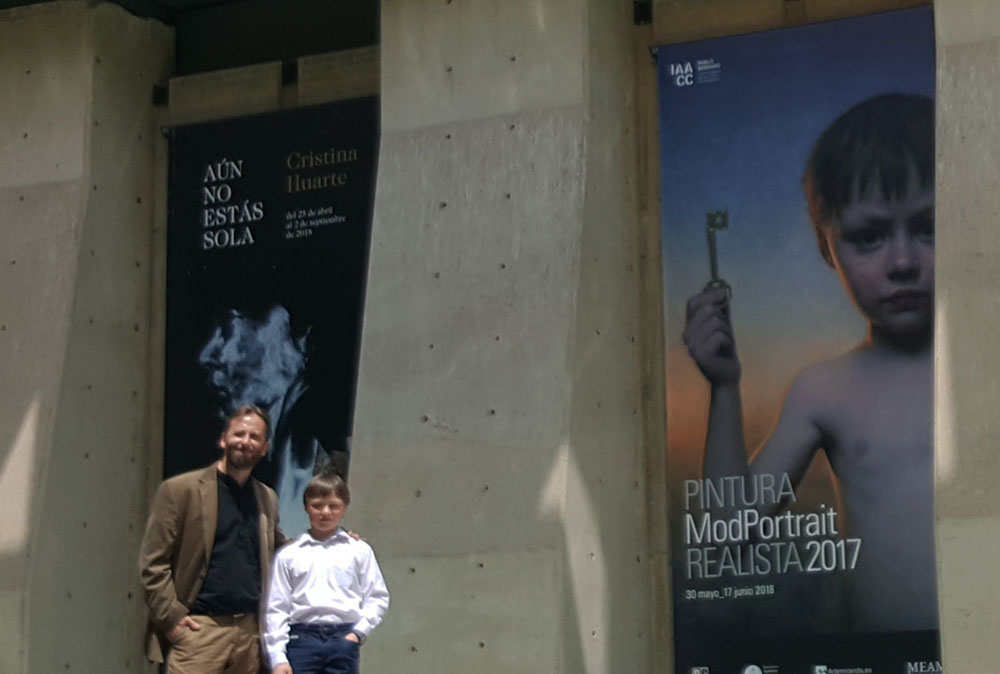 Conor Walton and his son Daniel outside the Museo Pablo Serrano, Zaragoza 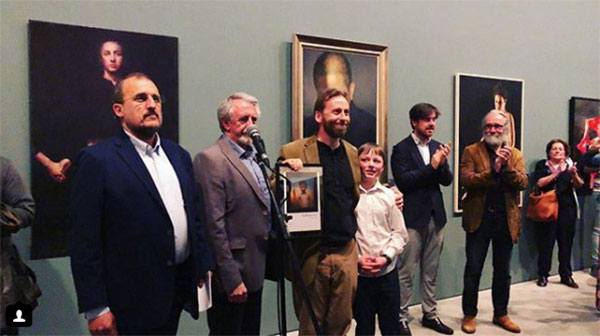 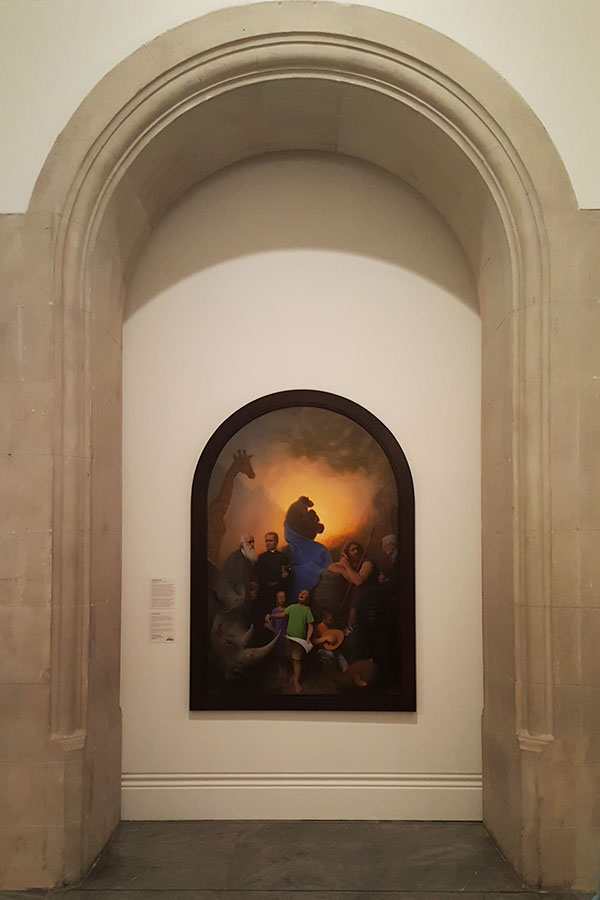 Conor Walton's painting 'The New Religion' featured prominently in this year's BP Portrait Award exhibition which opened at the National Portrait Gallery, London on June 14th 2018. The painting remains on display there until September 23, then going on a nationwide tour with exhibitions in Wolverhampton, Edinburgh, Bradford and Winchester.

This year's award was won by Miriam Escofet (UK), with runners up Felicia Forte (USA) and Tongyao Zhu (China).

The BP Portrait Award is the most prestigious portrait painting competition in the world and represents the very best in contemporary portrait painting. With a first prize of £35,000, and a total prize fund of £74,000, the Award is aimed at encouraging artists to focus upon and develop portraiture in their work. Over the years, this has attracted over 40,000 entries from more than 100 countries. 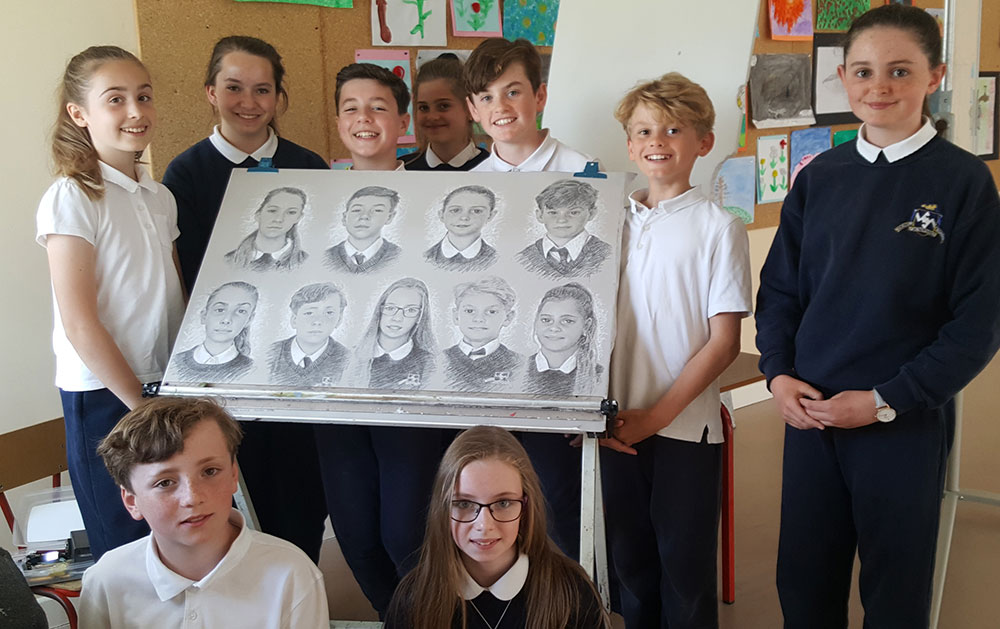 Once again Conor Walton has drawn the graduating 6th class at Wicklow Montessori School. Each portrait took about an hour and you can see a video of the process here. All proceeds go to support the school. 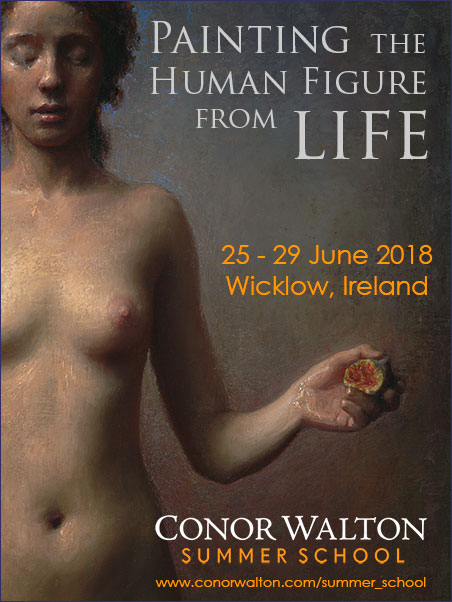 The Conor Walton Summer School drew students from four continents this year and was a great success. Here are some students' comments on their experiences:

"After spending the week at Conor's studio, emersed in an atmosphere of focused learning and supportive expert tuition, I've come away with sound artistic strategies grounded in art history and colour theory which I hope to apply to my own practice and future work. A very pleasant professional atmosphere , great to meet other artists and well kitted out large studio."
- Melissa O'Faherty (www.facebook.com/melissa.ofaherty)

"Thanks Conor, I learned a lot from watching you in action. And from what you said to me. I also met really lovely people including Jane who could not have been more hospitable and served up delicious grub. I feel better able to paint on my own now and that's what I'm going to do so thank you for that. Pandora's Box has been opened! I will certainly recommend your workshop to friends who wants to learn to paint better."
- Yvonne Pettitt (www.facebook.com/profile.php?id=100000547911839)

"Conor is truly a master in his own right. His pursuit and dedication to his craft not only shined through his paintings but also through the incredible knowledge he has obtained from his relentless researches and experiments. The Summer School was an intensive 5 days of bootcamp, at the end of each day, I was mentally and physically exhausted. Conor kept the class worthwhile, even with major jet lag and not feeling all that well, I was never feeling sleepy or bored. I've learned so much about myself, the craft, the attitude, valuable skills and knowledge of what it takes to be a good painter. Now I just can't wait to implement what I have learned in this program into my future work. I highly recommend Conor's course."
- Chia Schuler (www.instagram.com/chiachunart)

"Conor Walton offers a master class that offers much interest and ease in participation. A wonderful opportunity to indulge yourself in timeless instruction, skill sharing and a focused end goal. The residential option was most comfortable and I felt very welcome and well looked after. It was wonderful to spend time in a working artists studio space and relate this to my own endeavours. Conor is a knowledgeable and talented artist who is open and particular about sharing his methods. After painting for twenty years it is true there is always room to learn. Currently digesting!
- Tammy Andrews (www.instagram.com/tammyandrewsartist) 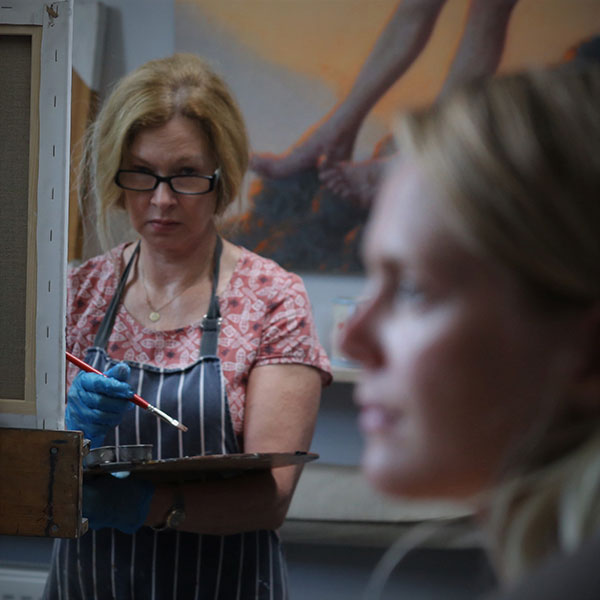 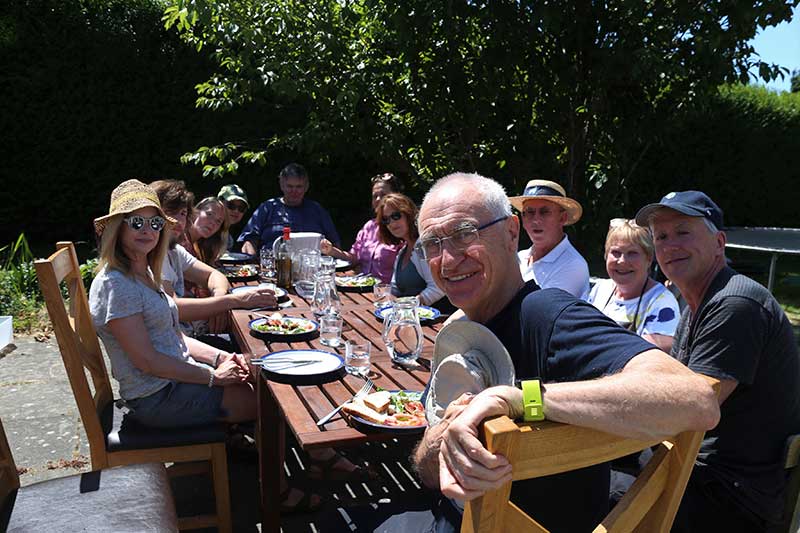 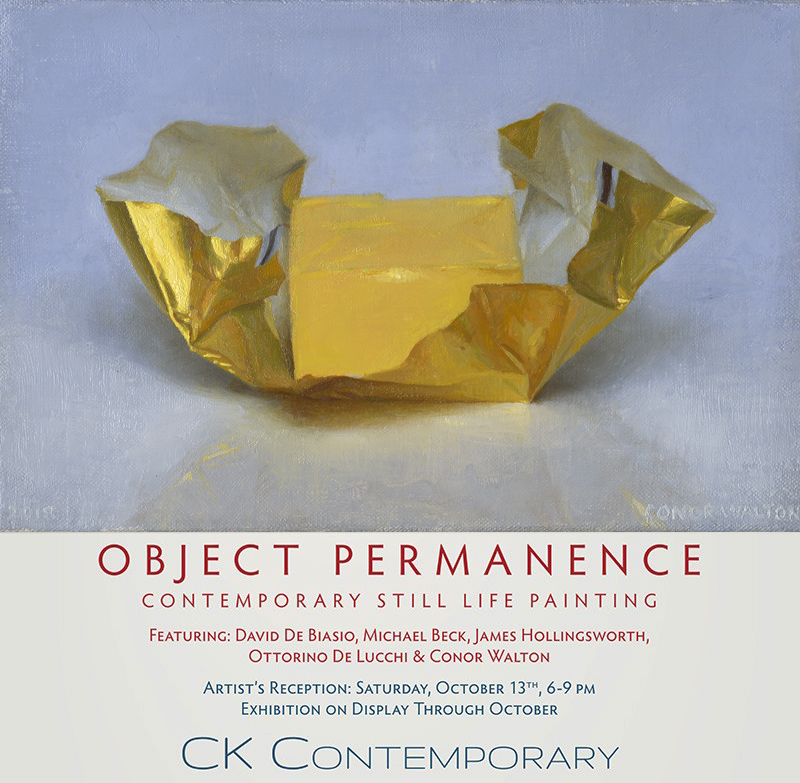