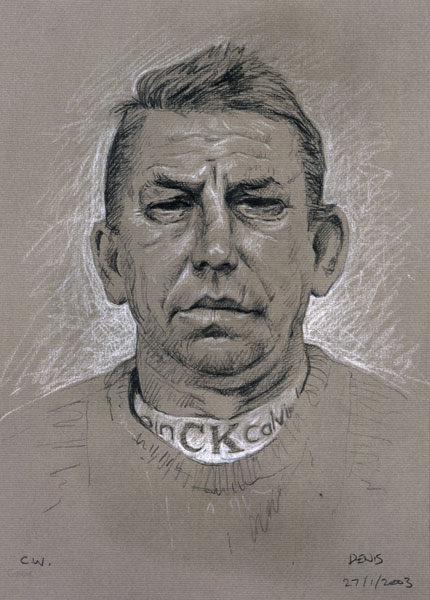 These portraits were drawn in the Simon Shelter on Usher’s Island, Dublin, where I used to work on Monday nights as a volunteer. When I originally started this work we were kept busy enough answering the door, giving out food, blankets and cleaning the place, but later the role of the voluntary worker changed; there was more time to just sit and talk with the residents. I decided to use some of this time in drawing these portraits. At the back of my mind was the idea of mounting an exhibition of them, as a way of raising consciousness of the homelessness problem and raising funds for the Shelter itself. The project quickly took off, with plenty of enthusiastic would-be models, and after a lengthy process of consultation with the Shelter residents, staff and Simon management, it was agreed that the exhibition could go ahead.

Eventually forty 'shelter portraits' were exhibited in Jorgensen Fine Art in April 2003. All forty sold, ten being acquired for the collection of the National Library of Ireland. Thanks to several donors who covered the cost of framing and a small catalogue, and to Ib Jorgensen who offered his gallery space free of charge, the entire sale price on the drawings went directly to the Dublin Simon Communtiy.

These drawings are modest in their ambition: few took much more than an hour (the quickest took about half an hour); all were drawn directly from life in one sitting. Little attempt was made to make a composition or anything very artistic: formal concerns were subordinated to getting the person down on paper as quickly and spontaneously as possible. While the drawings may be seen as essays in descriptive realism, each drawing, more importantly, represents a simple encounter with another human being. 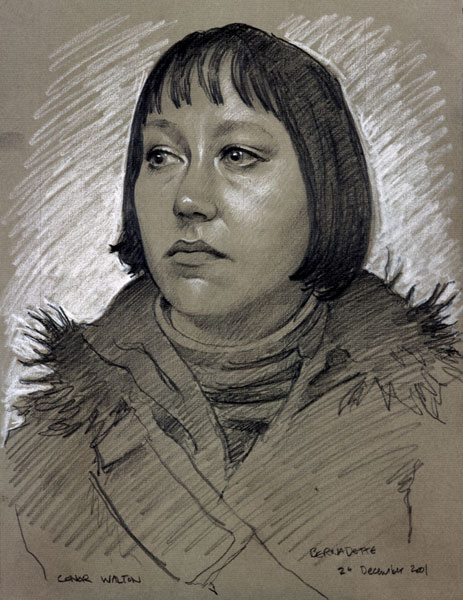 The residents appear in these drawings as one finds them in the Shelter, without the more obvious signs of degradation that one associates with homelessness on the streets. Meeting these same people outside the Shelter can be quite a different experience, but the squalor and degradation of homelessness were not what I wished to focus on. I wished to show the people themselves as individuals; to remove some of the facelessness that homelessness imposes. The people I have drawn are often fascinating characters; most have experienced things that you and I can only hope we never have to face. Suffering can brutalise, but it can also humanise, by extending the range of human experience. It is this which made these people so interesting to draw: their lives show in their faces.

A professional portrait painter's usual subjects are society's successes: the rich, the famous, the artistic, academics and professionals being honoured for their achievements at the summit (or end) of their careers. I don't do very much of that sort of work, but enough to know how difficult it can be to escape the formality of such portrait-situations. This formality is partly a matter of roles or robes; of 'best clothes' or just 'trying to look one's best' for the portrait. But it also extends to the nature of success itself, and the sort of roles it imposes on us. To some extent we all play roles to get on in society: often the most successful are those who play these roles the best, and who cultivate the qualities - discretion, diplomacy, charm, confidence, savior faire - that help to make their social mask seamless with themselves. Portraying those who have had to face failure in a very personal or public way is quite different: often the social mask has cracked open irreversibly, and a little 'raw humanity' bleeds out. The face becomes marked by the struggle of conflicting emotions; the record of their struggle with themselves and with the world. 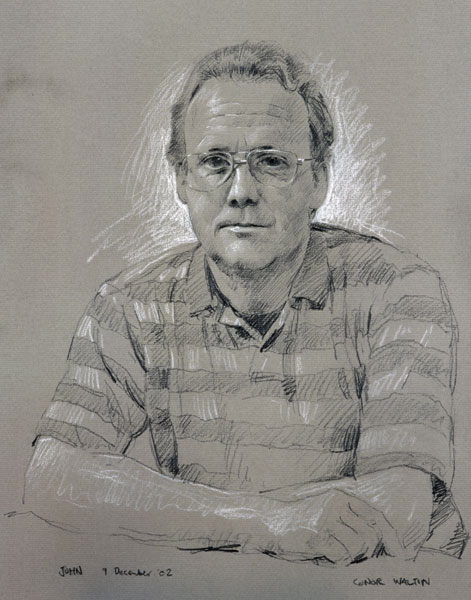 It is much easier to see these things when working directly from life. Photography can be quite misleading in this respect; we can all manage to compose ourselves, to smile or look happy for the length of time it takes to snap a photograph. In the time it takes to draw a portrait, no such 'happy' pose can be maintained; the face relaxes and the dominant expression - that which reflects a person's sum of experience and general attitude - comes to the fore. The human eye, too, has many advantages over the camera: its gaze is empathic; it responds to expression, seeking out those signs in the face of another that reflect inner states, our essential selves. If, socially, to exist is to be seen, knowledge of how we are seen, and what others see in us, must have a bearing on our sense of self. I was struck by how literally lacking in self-image these people often were: most had certainly never been drawn before; had never seen themselves recreated through the eyes of another. The simple act of recording another's features acquired a significance and a value, as an act of attention, that I have not usually found in normal portrait work, where usually the sitter already has a strong sense of identity and self-image, and is not expecting to be revealed. While I generally started each 'shelter portrait' without much prior knowledge of the sitter, trying just to draw what I saw before me, I was surprised and heartened at how often, on viewing the results, the sitters seemed to feel that I had not just recorded their features, but gained some insight or understanding of them. The drawing sessions often had the feel of an earnest, silent conversation, after which the sitters often spoke quite openly about themselves, their lives and problems, as if, through the drawing, we had come to terms with one another.

Even so, not all these portrait sessions were ponderous affairs: some happened in a relaxed and light-hearted way, with plenty of jokes about 'wanted' posters. I hope these things show in the drawings, too.

I would like to express my gratitude to all who sat for these portraits, and who gave themselves as subjects, to this exhibition: I can only hope that they got as much out of it as I did.