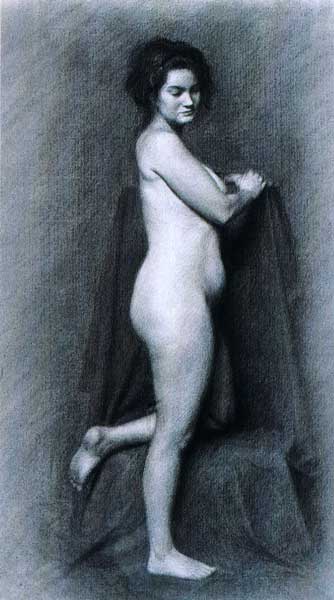 This nude was drawn in an atelier in Florence where I was learning about old-master techniques of drawing and painting. The drawing was set up on an easel, in such a way that at a certain distance back (about six feet) the image and the model appeared the same size, side by side. All drawing decisions had to be made at that distance; when I moved forward to make a mark on the paper, I could no longer see the model. Drawing at a distance, so to speak, imposes its own aesthetic; one finds oneself looking holistically, trying to capture the aura of the model, rather than delineate her features in an analytical and determined way; trying to effect transitions rather than define boundaries, and eliminating all details, softening all hard lines, which tend to call attention to themselves and thus undermine the harmony and unity of the image as a whole. It's a technique that impressionists like Seurat used to great effect.

The process involved the application of many layers of fine charcoal, slowly building the picture up to achieve the richest effect that the medium would allow. Though charcoal is perhaps the oldest and simplest of media, it can yield a subtlety and perfection impossible to achieve in richer media such as oils. Its delicate tones can convey a sense of light and atmosphere, of the softness and luminosity of flesh. The process requires patience and discipline, but it has a meditative aspect, and can be quietly satisfying.