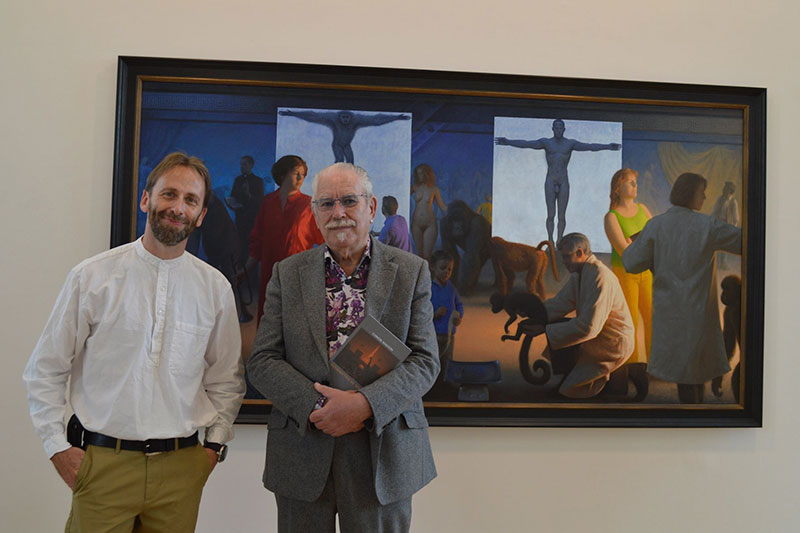 Conor Walton with Robert Ballagh. Behind: 'An Ape's Limbs Compared to Man's', oil and metal leaf on linen, 240 x 120cm, 2015,
collection of the artist

It is such an exceptional pleasure to visit this gallery and view the wonderful paintings by Conor Walton. Ever since he was an art student, Conor has sought ways to enhance his art practice by immersing himself in the techniques used by painters over many centuries. after he left the National College of Art in Dublin in 1993 he pursued an MA in Art History and Theory at the University of Essex and then studied old-master techniques in Florence. All that hard work and commitment has resulted in these exceptionally well-crafted pictures currently on display here in Athlone.

However, I am convinced it would be a mistake simply to view Conor Walton as an artist with exceptional skills who makes fine pictures. Conor is a person of stong opinions, someone with a lot to say, and he uses his art practice to capture, critique and present contemporary social issues to the public. Nevertheless, even if his pictures obviously refer to contemporary events, he remains determined that they are not reducible to mere propaganda. He wants his work not only to be accessible to a wide audience, but also to challenge viewers as to whether their own opinions are being endorsed or mocked. He describes this ambiguity as 'dancing along cultural faultlines'. As it happens, I believe that the kind of realist paintings that Conor paints are perfect vehicles for this sort of ambiguity.

Conor Walton has established an international career that sees him exhibiting world-wide. Some time ago, while on a trip to London, I wandered into the National Portrait Gallery to view the BP Portrait Award Exhibition and was pleasantly surprised to see Conor's painting 'The New Religion' hung in a prominent position. However I was intrigued to see rows of temporary chairs laid out in front of the picture, and as I hung about, observed a group of visitors quickly occupy them. Their accompanying guide then proceeded to talk about the painting. As I listened, I became slightly irritated, as I felt the guide didn't quite get the gist of the painting. I was tempted to blurt out my own interpretation, but thanfully discretion prevailed and I kept my mouth firmly shut. This evening, however, I have no difficulty in declaring that it is a great privilege to formally launch this powerful body of work by an exceptionally talented painter - Conor Walton.

Robert Ballagh is a leading Irish artist and designer. Above are excerpts from his speech deivered at the opening of Conor Walton: Asymmetrical Warfare at Luan Gallery, Athlone, August 17th 2019. 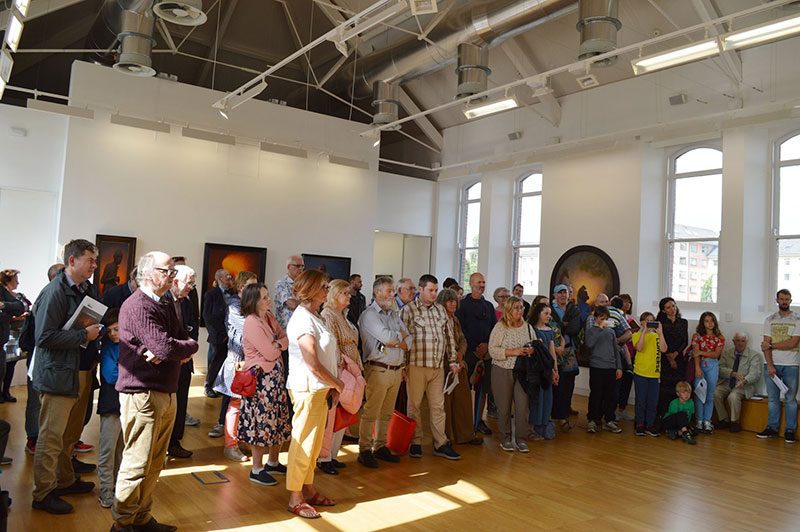