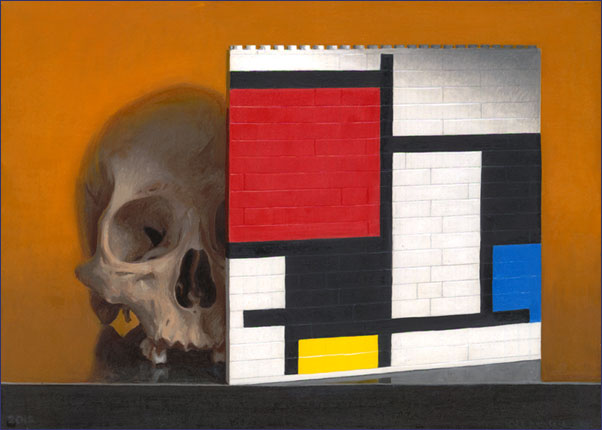 'We are not, nor were we ever, in control of our destiny.
- Conor Walton

In Conor Walton’s Lego Mondrian a human skull peers from behind a wall of plastic Lego blocks. The skull, a subtle natural form, is also a traditional “vanitas” symbol that has served generations of painters as an image of mortality. The Lego blocks are children’s toys— modular bricks molded by a machine—that click together to form the severe geometries of a Mondrian painting. These two visual elements are so different that their appearance together is decidedly unexpected, even jarring. In fact, their obvious dissonance raises a question in the viewer’s mind: what on earth are they doing in the same painting?

The answer is that Walton has pitted these carefully chosen items against each other to generate a symbolic drama. Measuring only 10 x 14 inches, Lego Mondrian is what Walton thinks of as “a little picture about big issues that clearly demands interpretation.” The main issue in this case is the battle between nature (the skull) and culture (the Lego Mondrian). It is a battle in which the Lego wall plays dual roles: it mocks Modernist high culture and attempts to hide the more convincing and threatening reality implied by the skull. The skull—as Walton explains—is also a symbol of the inherent superiority of natural forms:

Rectangles and grids are hardly ever found in nature because they are structurally rigid and brittle. Living nature always follows the path of growth, which is curved and flexible. A skull is a perfect example; it is generated out of continuous curves. Structurally, it is way more sophisticated than the Mondrian grid. In my book it is also way more beautiful, as things which grow are always more beautiful than things that are schematically constructed. I think the skull wins the battle in this painting because of its subtlety and depth.

Of course, this confrontation between nature and culture is about more than beauty. Walton acknowledges that “art and nature have always been at war” but he also perceives humankind as now being in its most precarious situation ever, moving with alarming rapidity towards environmental catastrophe and possible extinction: those are the deeper concerns animating his paintings. Culture is a “façade” and an artificial construction that blocks our view of nature and mortality. The belief in progress, a key element in modern culture, also shields us from the consideration of grander forces that may shape our destiny.
If you let these views sink in for a moment you will understand Conor Walton, and you will also understand why he is an “enemy of progress.” Both as an artist and as a father, nothing worries him more than the sense that he and his family—like other first world families—are living in a state of grace, temporarily sustained by fragile economic and cultural constructs . As he recently wrote:

Despite the fact that I live in a very peaceful part of the world, well insulated from most of its troubles, at this point I fear for my children’s future and the future of everything that I hold dear.

Because of his skeptical view of progress, Walton’s ideas about art are distinctly retrospective. The currently accepted model of art history in which tradition is discarded during an insistent and unified march “forward” strikes Walton as ludicrous and perilously naïve. Ever since he read Sir Kenneth Clark’s Civilization at the age of 17, Walton has been struck by what he sees as the “discontinuity with classical or humanist concerns that modernism embodied.” For Walton, to be a serious artist has meant adopting the models and methods of earlier European masters whose concerns for nature and humanity were broader and more deeply sourced. His work—like theirs—still has its basis in observation, and nature remains his ultimate touchstone and reference point.

' The Enemies of Progress' oil on linen, 60 x 120cm, 2015
In his painting The Enemies of Progress Walton includes a small figure of himself—brush and palette in hand—leading a crew of misfits that includes dinosaurs, extinct and endangered species, indigenous peoples, old gods and heroes. The assembled figures stand for all those whose beliefs, values, and ways of life are threatened with obsolescence; those whose very existence is undermined by the “March of Progress.” They are preparing to attack a gleaming but generic cluster of architectural forms, a bland, featureless utopia that resembles a modern city skyline. The Enemies of Progress is a principled, courageous, and darkly comical painting. As in all of Walton’s work, the strain of humor is extremely pointed: it is serious humor infused with tragedy. 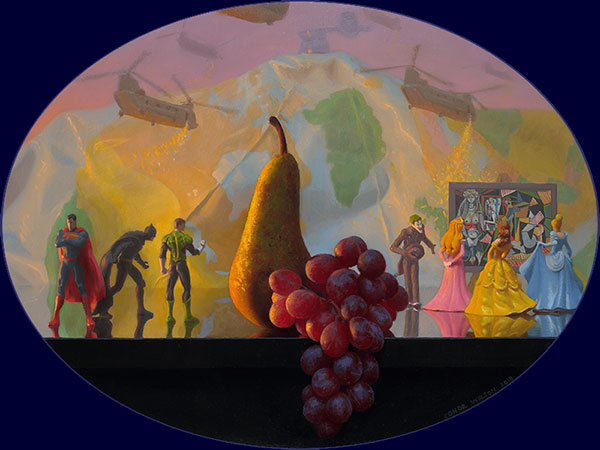 The Joker Wins Again' oil on linen 18 x 24 inches, 2018
The subject matter of a traditional still-life painting—a pear and some grapes—hovers lusciously in the center of Walton’s The Joker Wins Again, only to be ignored by its population of plastic figures. On the right a trio of Disney princesses inspect one of Picasso’s Femmes D'Algiers canvases: the one that recently sold for over $179 million. As the toy ladies ooh and ahh over a modernist harem scene (how progressive is that?) a flock of toy helicopters drop torrents of cash on a deflating globe while two out of three superheroes look on
helplessly. Superman looks away—he at least has the resolve to avert his attention—while the Joker closes the deal.

The Joker Wins Again is Walton’s commentary on many situations in current culture, including the impotence of do-gooders. “We can see what is wrong,” Walton philosophizes, “but we can’t do anything about it.” The madness of high finance, as embodied by the speculative fever of the high-end art market, is symptomatic of the fact that the jokers are profiting. “This picture is not primarily about art-politics,” Walton explains. “It’s about the state of the world and the perversion of values, in which the whole business of art becomes a manifestation of decadence, read not as a cause but an effect. And I’m not offering a cure or a solution; I’m simply trying to manifest the symptoms myself, clearly and for all to see.” 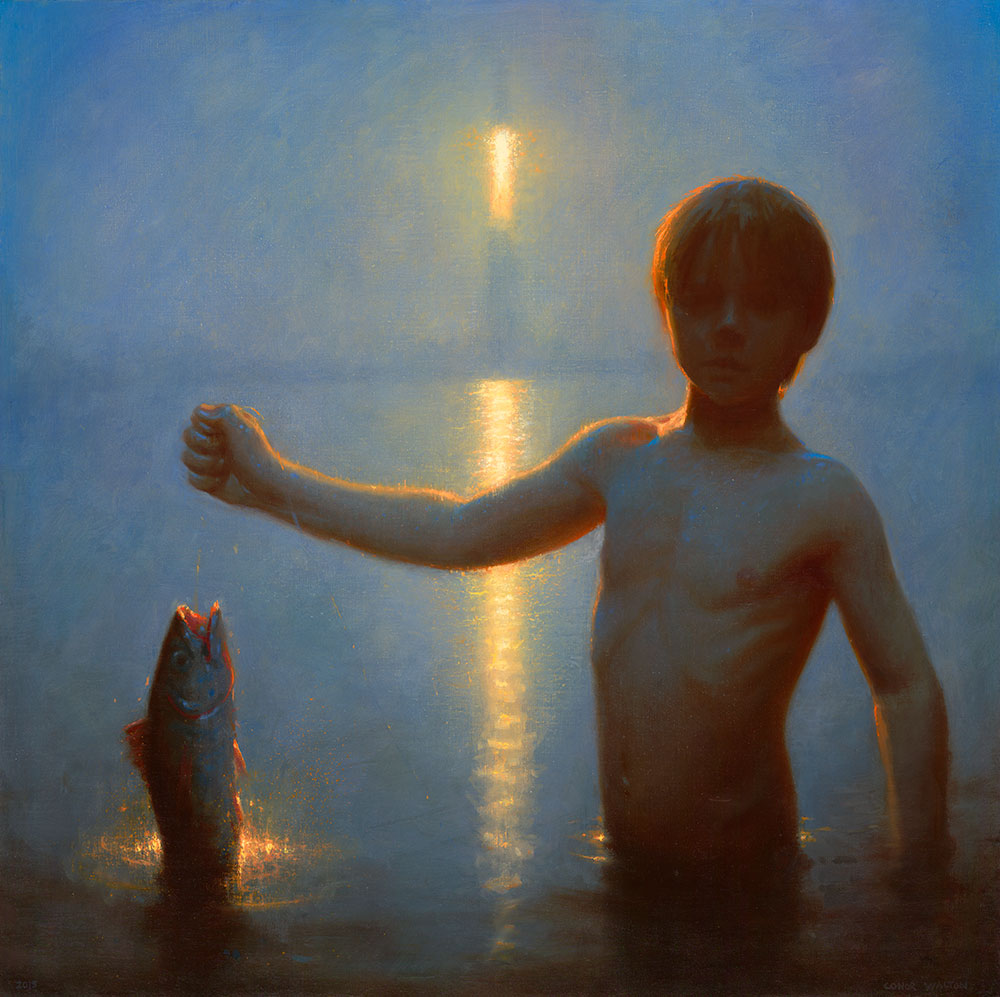 'Phaethon', oil on linen, 90 x 90cm, 2015
Walton’s Phaethon, which features the artist’s son Ciarán, takes a contemporary event—a rocket launch—and traditionalizes it. Walton has titled the painting Phaethon in reference to the story of the son of the sun (Helios) who joyrides his father’s chariot through the heavens and nearly destroys them. Connecting his image to the tragic myth of a hero who thinks he is in control, but finds out the hard way that he is not, is Walton’s way of raising questions. A primary question is this: will science allow us to conquer nature and become godlike—the ideology of Progress—or are we harnessing forces we cannot control that will ultimately destroy us? “What I’m aiming at is not a depiction of the myth,” Walton notes, “but the drawing of a parallel; a sort of commentary upon what is seen whereby a glorious, radiant image is implanted with the germ of an epic tragedy.”

The poignancy of life’s transience shades the figures of Et in Arcadia Nos, a major work that Walton has been developing over the span of
many years. It actually began as a painting of his partner Jane before their children were born: their first two “found their places” as the canvas developed, but he never managed to squeeze in the third. “We sometimes joke that she is the gorilla.” 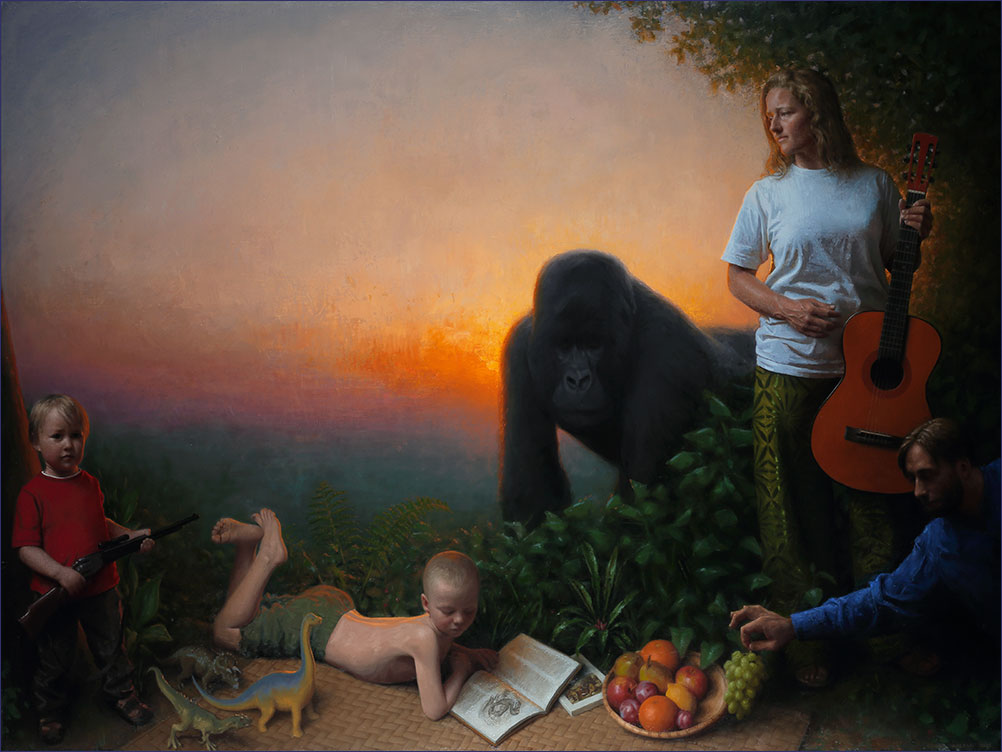 Set in a stage-like space that puts the family on display in a kind of natural history diorama, Walton’s Arcadia generates a personal and nervous familial image of perpetual innocence, shaded by mortality. The gorilla that appears in Et in Arcadia Nos adds the element of an endangered but related species and adds an elegiac tone to the composition. It’s a painting that constructs a walled-off “Golden Age” to symbolize the fate of humanity.

One might argue that, in terms of affluence and life-expectancy, humans have never had it so good: if any time can be called a Golden Age surely it is ours. But our affluence has also bred a childlike optimism, a disconnection from the harsher facts of life and the harder lessons of history. Ignoring these, we sow the seeds of our own destruction.
Interestingly, Walton says that despite—or perhaps even because of—the uncompromising messages in his work, people seem more interested in it than ever.

Because of his ability to generate dramas of ideas, and to paint them masterfully, Walton’s paintings are hard to look away from. Opposing easy optimism, they offer a vision grounded in realism and cathartic tragedy. It is tragedy, Walton believes, that can heal us by easing the burden of our guilt.

This essay by John Seed was originally published in the catalogue to Conor Walton's exhibition 'The Enemies of Progress' at CK Contemporary, San Francisco USA, in 2015. 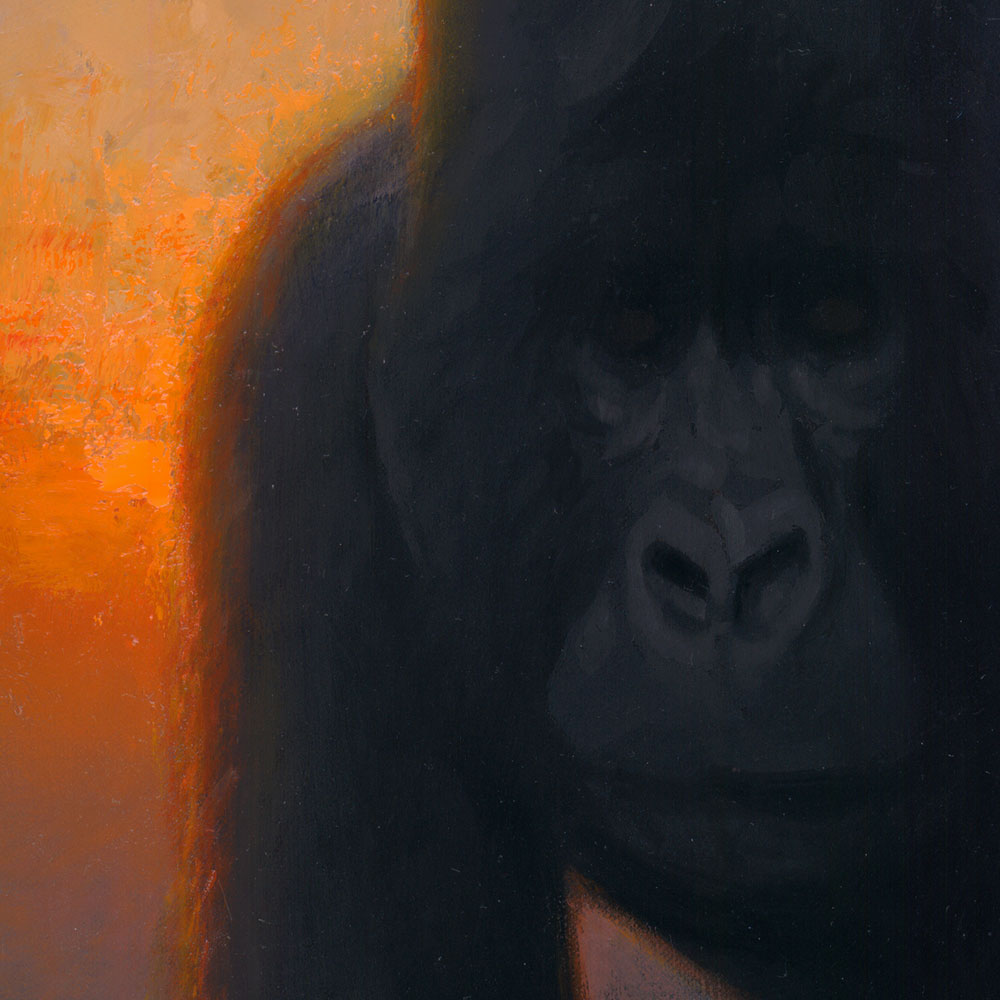