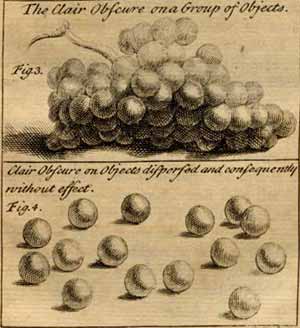 In his Principles of Painting (Paris, 1708), Roger de Piles describes Titian’s great rule for creating a sense of unity in painting, what de Piles calls the tout-ensemble:

Titian called it the bunch of grapes, because the grape, being separated, would have each its light and shade equally, and thus dividing the light into many rays, would cause confusion; but when collected into one bunch, and becoming thus but one mass of light, and one shade, the eye embraces them as a single object.

Conor Walton’s art is deeply informed by this tradition, and as a first principle his paintings of exquisitely rendered objects and figures display a scrupulous observation and formal unity. The radiant bunch of grapes is indeed ‘one mass of light’. But however harmonious these paintings may appear, there is more at stake here than harmony and balance.

Whether it is through colour, form or symbolic interplay, Conor’s work appears to exist in a state of perpetual tension. Even in that most static of genres, the still life, his paintings exhibit antagonisms between the ‘reality’ of exquisitely rendered objects and the life masks with closed eyes whose life is elsewhere, or present dead nature in its simplest terms - a bunch of grapes, dying sunflowers - in a stylised, highly theatrical setting. The figures are strongly, sometimes thickly, present (see the heavy impasto on the wrinkled belly of St. Jerome), yet their context has been distilled to the point where it is very nearly an abstraction - a skull, a scroll, a tongue of red cloth, a Playboy magazine, a shadowy hint of landscape.

On the one hand I see a fervent and thorough immersion in the tradition of painting, rich and contradictory. It is a tradition generous enough to embrace at once lofty principles and crafty technical device. Conor has, for example, painted every object, every figure in these paintings at its full, life size. The life-size image is less an illustration, a representation, than an embodiment of the thing itself. We needn’t look in to find the thing; it is presented to us, almost in the room with us, part of our own physical space. Sometimes walls and shallow shelves are used, not only out of respect for the ‘integrity of the picture plane’ but to throw the objects even farther forward, a strategy akin to that of bas relief. 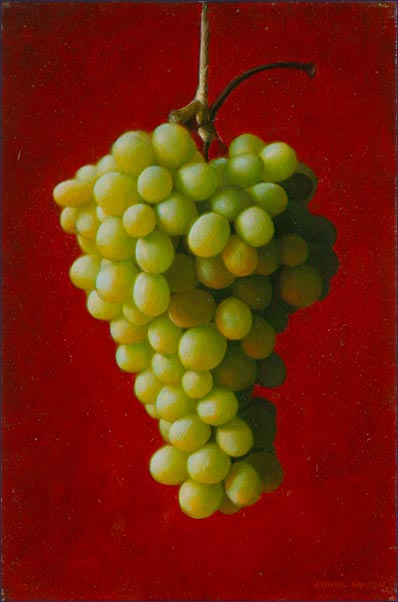 On the other hand I see a use of colour occasionally so intense it threatens to dematerialise the objects it fills. A bunch of green grapes hangs before a rich ground, red and fresh as blood. Flora, a carefully balanced but abundantly dissonant presence, hovers above a featureless ground of startling blue. Like the grapes she is given no context whatsoever, save the title itself. We see the unity of each still life threatened by the heteronomy of its constituent parts, held together by the play of light. We see star charts and constellations that present the unrepresentable. They are included not as objects but as an ambiguous background that can also be read as a flat screen, much as Watteau’s figures act out their tableaux vivants before what could be either a landscape or a stage backdrop of the same. Still life is traditionally the most ‘realistic’ of genres, down-to-earth, true to observation, visually objective. But the life masks have a dream-life of their own; they are objects that beg to be read in a non-objective way.

Conor explores such conflicts both formally and thematically. A number of paintings in this exhibition refer to myths, perhaps because painting, however representational, like myth does not simply narrate reality; its meaning is incarnate and inseparable. Disembodiment is a fertile theme. ‘Why do you tear me from myself?’ cries Marsyas when he is flayed alive. And the intertwined myths of Orpheus and Dionysus, which share this theme, are a deep well from which to draw.

The last image we have of the mythical Orpheus is after he is literally torn to pieces by the women of Thrace while they are in the throes of a Dionysian orgy. His head, ‘now severed from his marble neck’ and still singing, floats down the river and out to sea. Dionysus himself is kidnapped as an infant, torn apart and eaten by the Titans, violent ancestors of the gods. His father Zeus, alerted, destroys them with his thunderbolt, while Athene saves the heart of Dionysus, from which he is reborn. It is from the electrified ashes of burnt Titans and consumed Dionysus that humanity itself is born.

We are thus a confusion of the Dionysian - immortal, wise, serene, of the race of heaven - and the Titanic - violent, anguished, earthbound and mortal. Although it is our condition to be torn asunder by this division, Orpheus, by the balance and sweet harmony of his music, was permitted the privilege of passing between the material and spiritual realms. The cult of Orpheus presented the possibility of achieving an afterlife beyond all discord and strife, a state of perfect harmony and resolution. But if the paintings here allude to such a final state, they cannot embody it. They remain enmeshed in - and celebrate - the drama of light and colour that is the struggle of life.