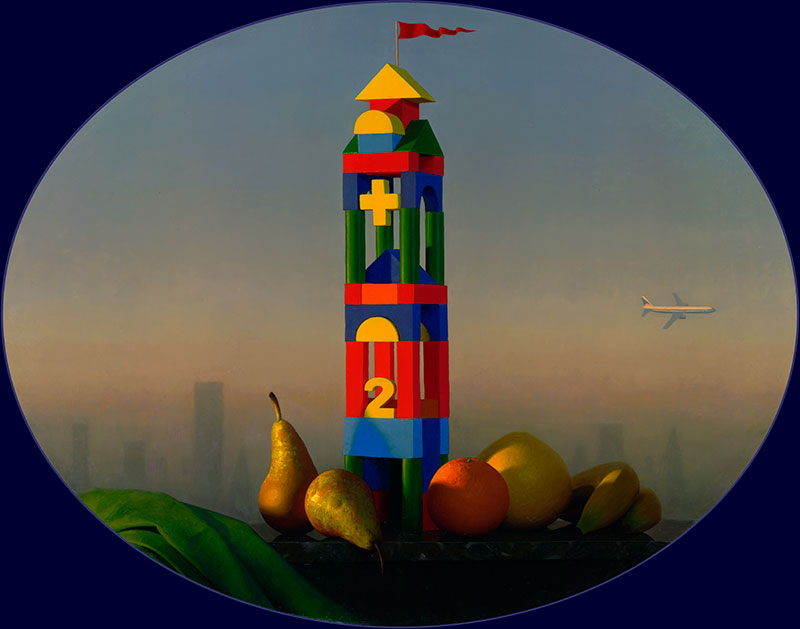 ...what strikes you about them above all is their extreme degree of immediate absurdity...
- André Breton, The First Surrealist Manifesto(1)

It is to be believed because it is absurd.
- Tertullian

How can one accept the fact that the dialectical method can only be validly applied to the solution of social problems?
- André Breton, The Second Surrealist Manifesto(2)

Conor Walton is master of paradox, of absurdity in the deepest sense—the incomprehensibility and irrationality of it all, the unresolvable contradictions that inform reality, the strange meaninglessness, inexplicability and irony that haunt events, reverberating inwardly to remind us of our own absurdity and the dubiousness and fragility of our lives. Thus in Walton’s I’m Still Standing (Yeah Yeah Yeah) (2010), the ‘I’ refers to the toy tower pictured, wittily condensing into a single symbol the two World Trade Center towers; the tower, a construction of lego building blocks, is labeled with the number 2 (of 9/11 fame), but refers also, implicitly, to Walton himself, a conservative, not to say old-fashioned representational painter—and thus an alien—in an 'anything goes' postmodern art world. His neo-traditionalist painting is a regression in the service of the ego of art (to allude to the psychoanalyst Ernst Kris’s famous concept), a regression necessary to save it from the inconsequence it has brought on itself by way of its so-called purification, not to say its dead-end self-absorption, which is responsible for what the philosopher Jose Ortega y Gasset called its dehumanization. In Walton’s work what Baudelaire called the 'Great Tradition' is reborn with a fresh sense of social and personal, and with that humanizing and contemporary, purpose.

I’m Still Standing (Yeah Yeah Yeah) is at once satiric and surrealist and tragic: a mollifying dream about a violent event—a perversely beautiful painting about an ugly reality. The collapse of the two trade towers is tragic, the reduction of them to one toy tower renders them comic. They turned out to be a soft target, as the soft pears at the base of the tower suggest.  As their melancholy, shadowy, humble appearance suggests, they may also signify the people who jumped to their deaths from the tower—truly soft targets compared to the building. It’s as though the attack on the World Trade Center Towers was a bad joke. The irony, and seeming impossibility and unreality of the event, is compounded by the tiny passenger airplane—another toy, vaguely hinting at the airplanes that flew into the twin towers—in the remote distance, heading away from the tower, leaving the scene of the crime, indeed, heading out of the picture into oblivion. This is a strangely metaphysical painting, as enigmatic and bizarre as one of de Chirico’s metaphysical paintings (is Walton, with his rich art historical knowledge, alluding to one of de Chirico’s towers?), all the more so because of its elusiveness. A 'hard' to accept event is rendered in a 'soft' manner—cruel reality is softened into aesthetically comforting art, compounding the absurdity of life, confirming the absurdity of society.


Such contradictoriness, I want to suggest, is the clue to Walton’s 'negative dialectics', to use the philosopher Theodor Adorno’s famous concept. In a dialectically negative art and society, opposites are perennially at odds . The toy airplane and the toy tower are stuck in irreconcilability, as the inorganic geomorphic building blocks and the organic biomorphic pears are—while in a dialectically positive art and society—the art and society Walton repeatedly alludes to; as his Europa and the Bull (2016) makes clear, they are subtly, even seamlessly reconciled. It is worth noting that in Walton’s painting the royal spectators watch as Europa and the Bull disappear into the distance, an allusion to the disappearing dream of a united Europe—a contemporary social reality—even as he is alluding to the distance between the contemporary spectator and his neo-traditionalist style, appealing perhaps because it softens the edges on a hard- to- take social reality, gives pleasure where there is pain. It is the deceptive sweetness on the bitter truth. Walton’s grand manner makes the artistic best of a pathological reality.  His overarching theme is 'the world turned upside down', symbolized by the upside-down pyramid in The Modern Way To Build A Pyramid  (2019), a hollow pyramid standing on its apex with a jagged, incomplete base; a pyramid that couldn’t stand right side up if it wanted to, for it has no foundation. One wonders if it was built by the black rats in the foreground, or did they just nibble away at its foundation. Indeed, it has a cheesy, flimsy look. 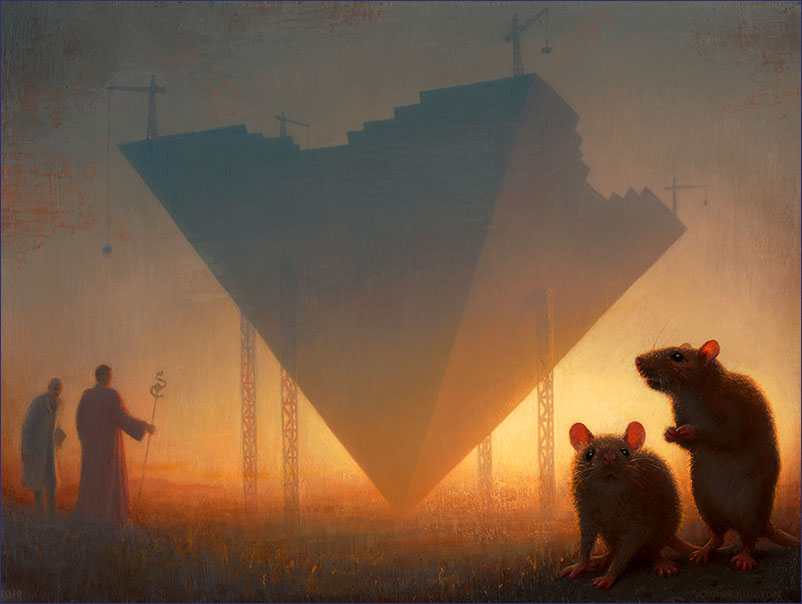 As such cruelly ironical, ruthlessly absurd works as The Dream of the Central Banker (2017) and Refugees (2016) make clear, Walton is a social critic.  Some people may think The Best Is Yet To Come (2018), but in fact the apocalypse has arrived, as Four Horsemen (2019) suggests. 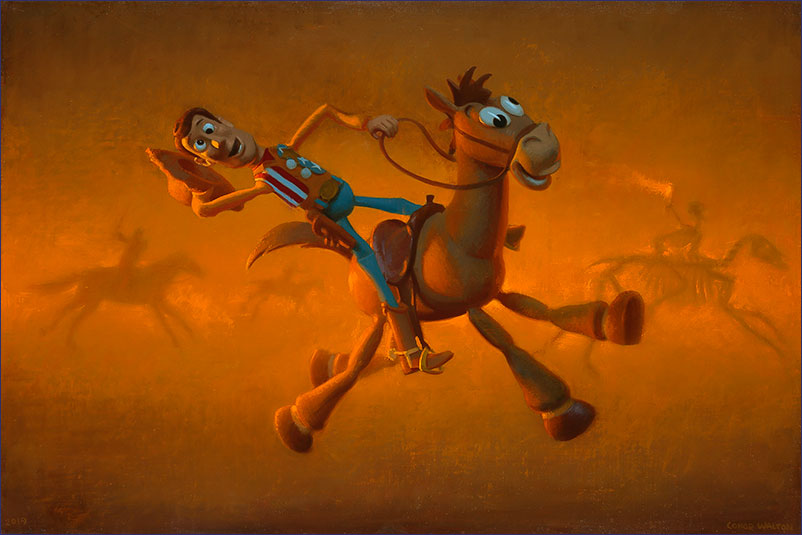 The horseman—a bug-eyed cowboy—may look like a comic toy, but the joke is on us. 'Apocalypse' is the Greek word for revelation, and, however comically absurd a revelation appears to be, the annihilation it announces is total. The contradiction—opposition, incompatibility—between the Irish Saint Patrick and the British Winston Churchill epitomizes Walton’s negative dialectics, perhaps better called pessimistic dialectics, for Ireland and Britain are irreconcilably at odds, spiritually different, and, as Walton’s work suggests, obsolete, fading heavenly mirages that have almost become caricatures of what they once were, or claimed to be. 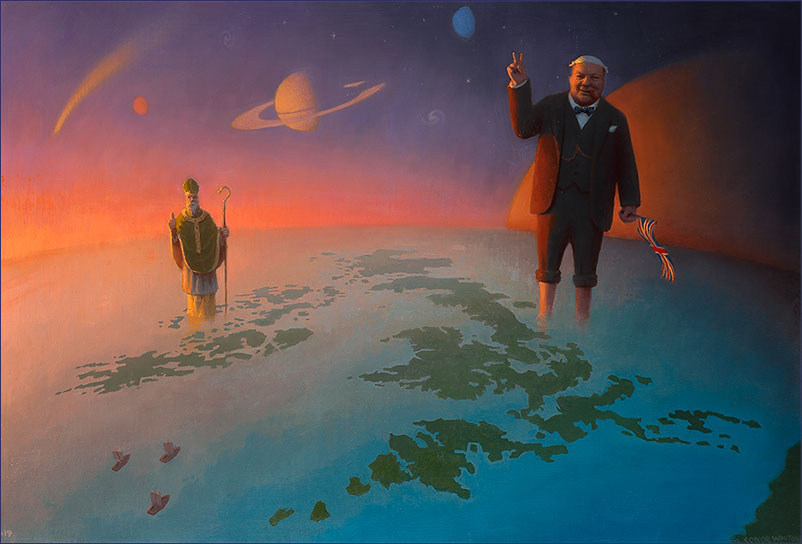 Caricature, carried to a pop art extreme—pop art is the vernacular art of the demos, a facile cliché-ridden art that appeals to the crowd rather than the aristocrats in Walton’s Europa and the Bull painting (aren’t ancient myths also clichés?), but also a socially (and instantly) comprehensible art, and as such readily assimilated into Walton’s representationalism—is endemic in Walton’s art.  It reaches an ironical extreme in Novus Ordo Seclorum (2018), his absurd yet psychosocially realistic rendering of the American President Donald Trump as Conan the Barbarian, implicitly Hitler, as the hands raised to him in the Nazi salute ('Hail Victory', more pointedly 'Hail Caesar', supreme strongman ruler). 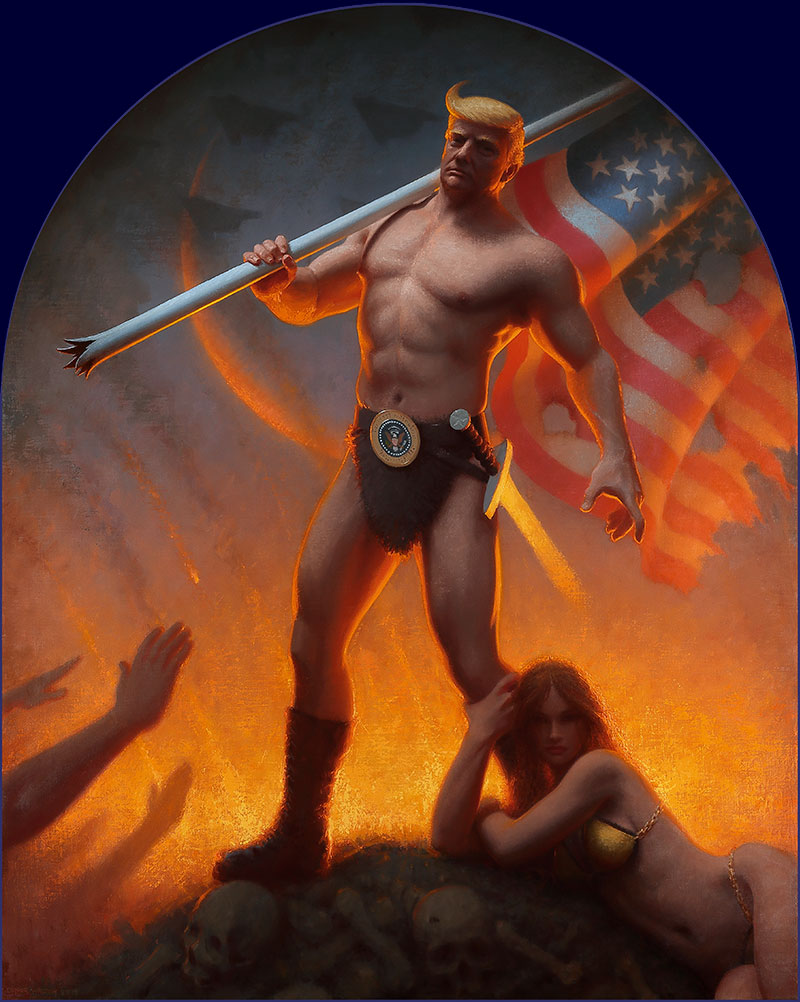 Walton’s pictures are loaded with connotations—he is an educated artist, his art is more than 'self-expression', a major example of what I have called the new objectivism (whatever traces of the old subjectivism linger in his atmospheric handling)—giving them an inner resonance and depth that the Pop Art he utilizes lacks, confirming that his works, with their disturbingly enlightened skepticism (or is it cynicism?) are High Art. 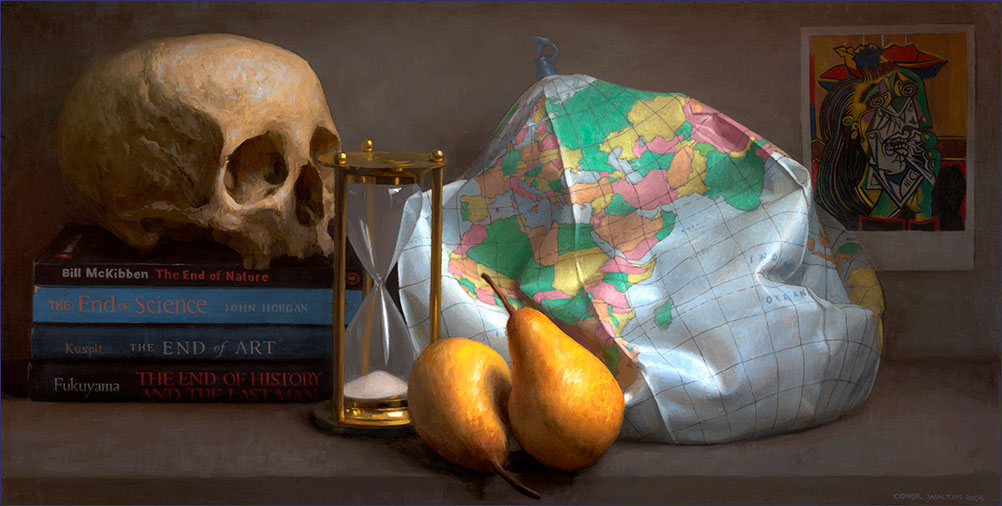 In the end, they are about the triumph of death in the modern world, as It’s The End of the World as We Know It (2006), with its skull and crumpled map of Europe and Africa, accompanied by books about the end of this, that, and the other thing, suggests. Time is running out, as the hourglass makes clear. Living death is ironically evident in the regression of man to ape—civilization to barbarism—as Monkey Painting (2013) suggests. The animal skull seems to be grimacing with amusement. Even modern art will die—is at a dead-end—as Lego Mondrian (2015) suggests. The Mondrian painting is made of lego blocks, suggesting it is a colorful toy—like the tower in I'm Still Standing (Yeah Yeah Yeah)—and with that a tragic joke. It rests against a darkish skull, suggesting that abstract art is the death mask of art. All three works are Vanitas paintings, suggesting that for Walton, in the last analysis, all is vanity, including art—the most insightful and unnerving vanity of all. 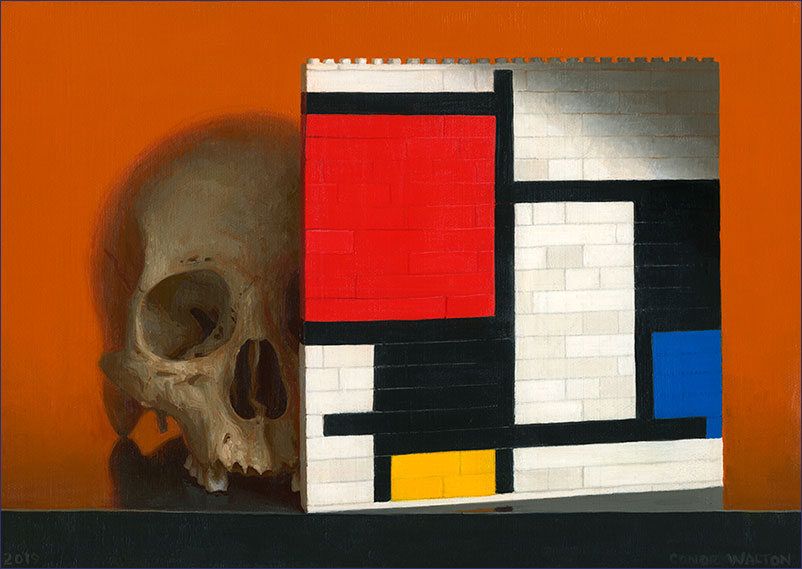 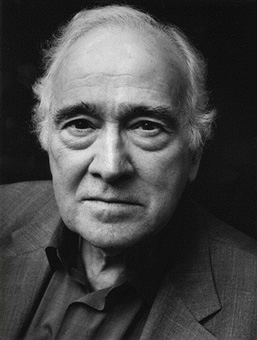 Donald Kuspit is one of America’s most distinguished art critics. He is Distinguished Professor Emeritus of Art History and Philosophy at the State University of New York at Stony Brook, and has been the A. D. White Professor at Large at Cornell University (1991-97). He is also Senior Critic at the New York Academy of Art. He has received many awards for his work, including the prestigious Frank Jewett Mather Award for Distinction in Art Criticism (1983). He has doctorates in philosophy (University of Frankfurt) and art history (University of Michigan), as well as degrees from Columbia University, Yale University, and Pennsylvania State University. He has received honorary doctorates from Davidson College (1993), the San Francisco Art Institute (1996), the University of Illinois (1997) and the New York Academy of Art (2007).  His books include A Critical History of Twentieth Century Art (2006), The End of Art (2004) and The Rebirth of Painting in the Late Twentieth Century (2000).