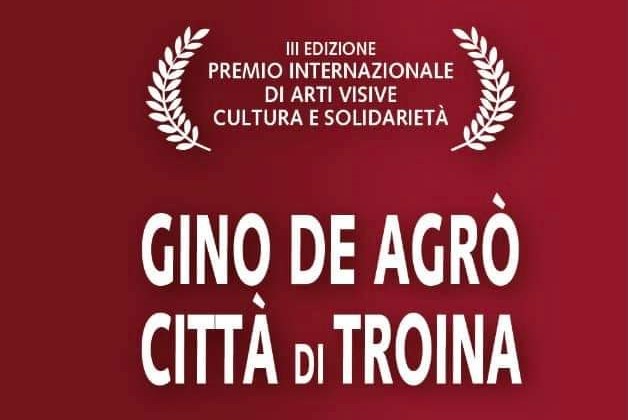 On June 25th 2022 I was honoured to receive the De Agrò Award in Troina, Sicily, and had one of my paintings join the civic collection.

The prize is named after Gino De Agrò (1919 – 2012), a native of the city who made a business fortune in Milan and amassed a large art collection which has since been gifted to the city.

Troina itself is a beautiful town in the heart of Sicily, perched on the crest of a narrow ridge and enjoying panoramic views over much of the island, including Mount Etna, smoking not far away. The Normans made it an impressive citadel in the 11th Century and made it the capital of their island kingdom.

During WW2 its commanding location again made it strategically important and the site of a major battle between US and German forces during the liberation of Sicily in 1943. Photographer Robert Capa parachuted in with US forces and recorded the Battle of Troina for week. There is a museum devoted to Capa, his marvellous photography and the liberation of Sicily as he recorded it.

Troina is a quiet town largely missed by tourists. Low birth rates, economic stagnation and emigration have led to properties in the historic centre being offered for sale for just one Euro (terms and conditions attached: you can find them here). I talked to an Australian couple who had recently purchased one of these and were planning to renovate it, spending two to three months annually there. And things do seem to be improving.

One of the curiosities of the town is how much modern art there is: the hotel I stayed in is almost a museum in its own right, filled to overflowing with unusual but finely crafted work. It was explained to me that the heart of the modern city is a special hospital, the largest of its type in southern Italy, which cares for physically and mentally handicapped children and which, from its foundation in the 1950s, encouraged artistic expression among residents and the practice of arts and crafts to a very high level. Partly as a result of this and the wider efforts of its leading citizens, the town has filled with artworks and its inhabitants seem to have acquired an unusual interest in art and a wish to celebrate cultural achievement. As part of ongoing efforts to make Troina a cultural hub, the annual De Agrò prize has recently been inaugurated and a new Museum of Contemporary Art has been founded and installed in the impressive Capitania Tower, part of Troina’s original Norman fortifications. One of my paintings has now joined the collection.

This is what the prize-givers said in appreciation of my work:

“Where do we come from? Who are we? Where are we going?” is the title of a painting by Paul Gauguin (1897) through which we can frame the artistic commitment of Conor Walton who reveals that his paintings are attempted answers to these three questions. In effect, his painting is a profound investigation into past human events and contemporary developments. The artist presents an oeuvre of great formal balance that draws expressive force from the European figurative tradition, compositional harmony, technical rigor. An attentive observer of the social system, he inserts himself with courage and feeling into the dynamics of contemporary society, searching for answers to doubts and problems. Sensitive to political and military facts (which since February this year create anxiety and concern not only in Europe) he conceived a torchbearer of light and knowledge, of peace and solidarity. A torchbearer who, like Prometheus, wants to give men the sun of concord, the torch of truth. For the quality of his pictorial research and for his engagement in the trenches of world confrontation, the “De Agrò – Città di Troina” 2022 Prize is awarded to Conor Walton as an emerging international artist. The hope launched by his bright colour is a clear message of peace for all.

I travelled with my son Daniel. A delayed flight almost had us miss the awards ceremony but an incredible driver managed to get us there from Catania, along mountain roads and hairpin bends at breakneck speed, somehow without killing us. (When I complimented him on the authenticity of his Italian driving style he made clear that he was not Italian, but Sicilian!) I don’t think I’ve ever been so happy to arrive somewhere! But having got to Troina, it turned out to be well worth it! We received an amazing welcome and hospitality. The dinner after the ceremony, presided over by Mayor Fabio Venezia had approximately fifteen courses and went on until 1am. It was wonderful to meet Nicola Verlato, another recipient of the De Agrò prize and a painter I’ve long admired. The extended De Agrò family flew in for the awards ceremony and were extremely hospitable, taking the time to bring me to see Gino’s grave (sculpted by Brindisi) and show me around the town.

Unfortunately, a covid infection kept me from meeting art historian and awards organiser, Paolo Giansiracusa, but we discussed further cultural collaborations remotely and I look forward to returning when the museum is open and my work is hanging.